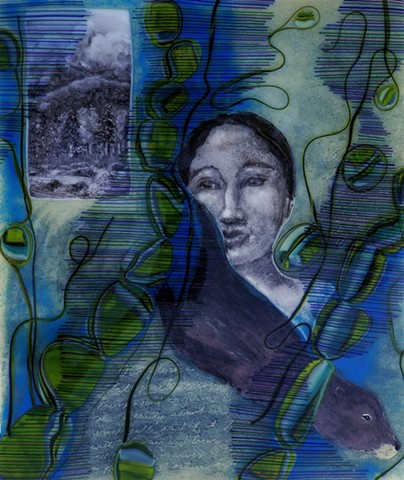 This piece was inspired by the writings of John Muir. I had planned the piece and completed the first layers with this quote; "Our flesh-and-bone tabernacle seems transparent as glass to the beauty about us, as if truly an inseparable part of it, thrilling with the air and trees, streams and rocks, in the waves of the sun,—a part of all nature, neither old nor young, sick nor well, but immortal.” ; John Muir, My First Summer in the Sierra. Johns Muir's reverence for nature and his spiritual beliefs are a continual source of inspiration and I intended to reflect that in the piece I planned. Then a face I was unfamiliar with and an otter appeared, along with a river scene. Not the images I intended. I thought I must have been thinking of Sacajawea when contemplating John Muir's travels through the west. Sacajawea was a Lemhi Shoshone woman and an essential member of the expedition to discover routes through the North American West to the Pacific Ocean. The face that had materialized in my studio was certainly that of a beautiful Shoshone woman. ..but where had the otter come from? As a woman, with daughters and now grand-daughters I was saddened by Sacajawea's story, and in awe of her strength and iron will. Around the age of 12, Sacajawea was captured by Hidatsa Indians, an enemy of the Shoshones. She and another young women were sold to a French-Canadian trapper named Toussaint Charbonneau. He was engaged as a guide for the Lewis and Clark expedition and he brought the young women with him. The girl with Sacajawea was called Otter Woman. It took quite a bit of research to learn about Otter Woman. She is mentioned only briefly in the journals of Lewis and Clark. I felt deeply for the plight of these young women. I was very glad to learn that as soon as the party reached Otter Woman's ancestral lands she was able to escape and return to her people. I thought it an incredible story of triumph and bravery and I'm glad she was able to speak through my work.