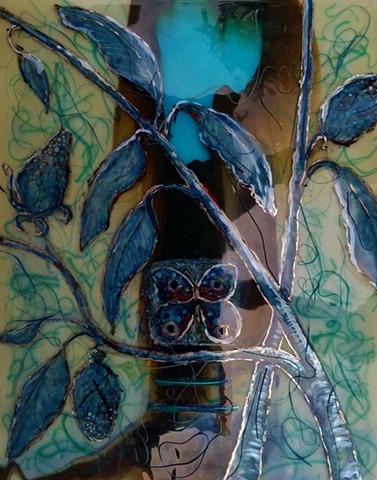 This piece was created with multiple firings, sinking hot worked elements into layers of glass. The final firing added a layer of Palladium. Palladium is a rare and lustrous silvery-white metal discovered in 1803 by William Hyde Wollaston. He named it after the asteroid Pallas, which was itself named after the epithet of the Greek goddess Athena, acquired by her when she slew Pallas. The Last Butterfly was inspired by a trip to Belize. After watching butterflies flit in and out of the rain forest canopy I was dismayed to see great swathes of clear cut areas. Palladium seemed a fitting memorial to the disappearance of rare and precious things.